Part I: The Breast Lump

For the past few months, I’ve had unusual breast pain, primarily in my left breast. And, it’s in a spot below the nipple that has bothered me off and on for many years. In fact, I can remember playing football in the fifth grade, and I was thrown a hard pass. The point of that football hit me in this EXACT spot on my then mosquito-bite-sized left breast, and it hurt for days.

When I was 19, I found a breast lump in my left breast, closer to my armpit. I was told I needed a needle biopsy, so I complied. I was then told that it needed to be removed, so I complied. At the same time, the surgeon removed a brown birthmark on my stomach, and when it was all said and done he informed me that the birthmark was more dangerous than the lump. No cancer.

When I was about 40, that spot below my nipple on the left breast bothered me enough that I went in for a mammogram. The doctor said there might be a slight shadow on the results, but it was nothing to worry about. They would watch it. Well, there were a few times over the next ten years when I felt something there, but I was never concerned enough to be washed in the 0.4 millisieverts of radiation per mammogram for no reason.

Now, I am 50. And, as I said, I’ve had more breast pain than normal for a few months. In general, it’s the type of pain experienced monthly when hormonal changes make life difficult for a week or so. Normally, this monthly pain subsides as the cycle begins again. Well, it hasn’t been subsiding. Some days are worse than others. For the most part, the pain is the same in both breasts, which is typical of cyclical breast pain. I did my research, which indicates that since I am in my perimenopause years, this is common.

But then that pesky spot on the left breast started to become a problem. Sometimes, I would reach for something, and I’d feel a sharp pain there. Or, I wouldn’t be doing anything, and it would throb. Not good.

So, I visited my OB/GYN for an opinion. She didn’t feel anything, but she scheduled me for an immediate diagnostic mammogram and ultrasound due to her concerns over the pain. I posted on my Facebook wall: “Keep me in your prayers. I am going in for a diagnostic mammogram and ultrasound because my boobs have finally decided to become relevant. They’ve never been big enough to make good decorations, and they’ve never had a chance to function since I couldn’t have kids. So, I guess they’ve had enough. I get it…we all need a little attention.”

Within a few days, I was scheduled for my tests at one of the best breast cancer clinics in Ohio. I was shown into a changing room and instructed to put on a robe, and then I was ushered into a waiting room, carrying my clothes in a pink plastic bag. I surveyed a sea of women of various ages, ethnicities and body types, all waiting for some form of diagnostic testing. Although one woman ate a bag of potato chips and read a romance novel as if she was on the beach, the intensity of emotion in the room was palpable. 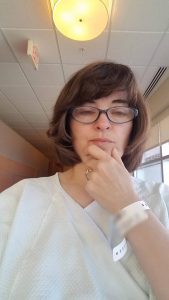 The nurse called out a name. “Sally?” The woman to my left stood up and promptly broke out in tears. The nurse took her arm and asked, “How are you doing, hon?”, and I heard the frazzled woman whimper “Not good” as she walked down the hall toward her fate. Tears rolled down my own face as this woman’s angst exposed the potential gravity of my own situation.

When the nurse called my name, I was not excited. Mammograms are not pleasant. As she prepared the pancake-maker, I went through a little routine to psyche myself up for what was about to happen, a skill I learned from my years as an athlete. She started with the left breast, and I let out multiple anguished yelps. At one point, I thought I might faint, so she handed me bottled water and had me sit for the remainder of the procedure. When she finished the left breast and prepared to tackle the right breast, she said, “Wow. I’ve never had a patient clap for herself.” Finally, the diagnostic mammogram was completed, and she said, “I need to show this to the radiologist. Based on his feedback, we may or may not do the ultrasound.”

She escorted me back to the sea of women in robes. Having no potato chips or romance novels, I updated my Facebook page: “The good news? If it’s merely a fluid-filled cyst, that machine just popped it like a pimple and sent the fluid somewhere over New Jersey.” Within a few minutes, the nurse returned. She squatted down next to me, touched my arm, and said, “Hon, we’re going to take you back for that ultrasound now.” Uh-oh. I could tell it wasn’t good news.

The ultrasound was easy. The nurse only focused on the left breast at that pesky spot that was causing so much pain and discomfort. I didn’t look up at the monitor. It would be one thing if we were looking for a heartbeat or trying to determine the sex of a growing embryo in my womb, but I had no interest in joining in on the search for a clump of invasive cells.

When she was finished, she handed me a towel to wipe off the goop and told me to wait. The radiologist was going to review the ultrasound. The nurse returned with the only male I had encountered all day. “Debbie, I’m [insert name here]. We need to discuss your results.” Within minutes, I was in another room, posting to Facebook: “Not good news. They found a 7 mm mass. They want to move quickly, so I am being taken through tests now so that I can get an ultrasound-guided core needle biopsy on Friday at 8:00 a.m.”

I drove home. I was relieved to know that this small mass, even if it is cancer, is treatable. Conventional medicine would give me a 97% chance of survival. Good times.

About the Author: Deb